Following incidents of welders' trucks being burned, construction equipment blown up with dynamite, holes drilled in pipe, night watchmen beaten, superintendents threatened, it was time something had to be done.

Those seven contractors that met one cold January day in Cheyenne, Wyoming, weren't exactly friends.  They were contenders in the highly competitive business of pipeline contracting.  It would be safe to say there wasn't one contractor sitting at the table that day who would have trusted any of the others any farther than they could see him.  However, the vandals had not been discriminating, because every contractor present had received excessive damage during the preceding year or two

The vandalism wasn't a local matter: of the seven contractors; two were from Wyoming, one from Montana, two from Utah, one from Colorado, and one from Nebraska.  With their backs to the wall, they knew they had to fight with a united front.  So they organized and chose a name that left little doubt what the Association's purpose was.

With the prospect of ten new members, and the knowledge by now there was safety in numbers, the Rocky Mountain President polled the other members, nine by now.   It is a great distance from Montana to Texas, but the Rocky Mountain members voted unanimously to help the Texas contractors.

After merging, the two groups proceeded to investigate the Texas incident which was the beginning of a national movement to overcome some of the problems faced by pipeline contractors.

Vandalism and acts of violence became less of a problem for the group over the years, but the geographic diversity of its membership and the ever changing technology and regulations of the industry lead the group to establish its present name and new focal points for the group. Drug and alcohol testing, safety programs, environmental regulations and issues, ADA rules and OSHA are but a few of the many regulations imposed on the industry, which are being addressed by the Association.

The Association conducts meetings to assist members in keeping abreast of the industry changes and serves as a forum to exchange ideas on how best to cope with these changes. The organization has grown from the original seven contractors from the Rocky Mountain region to a large group of contractors from throughout the United States. 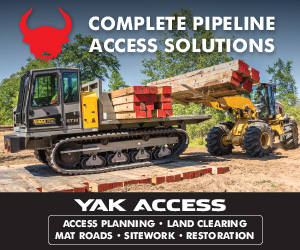